How can we help you today?

Knowing how to relate energy and power together is a very important concept, but it is also important to have a more in-depth understanding of electricity as well. This section will go over what electricity is made up of along with different forms of application.

Current, Voltage and Watts are all related to electricity. Current is measured in amps. You can imagine current as the amount of electrons. Voltage is measured and volts. You can image the voltage being the amount of pressure pushing those electrons. More electrons or more pressure pushing electrons means more energy, just like more mass or more velocity for an object means more energy.

Electricity by default will travel in one direction, which is called Direct Current, or DC. In a direct current circuit, electrons flow continuously in one direction from the source of power through a conductor to a load and back to the source of power. Originally electricity traveled by these means. The problem is, DC is not sustainable as it is hard to transfer electricity over large distances without power loses due to the low voltage level.

Eventually Alternating Current, or AC was discovered. An AC generator makes electrons flow first in one direction then in another. In fact, an AC generator reverses its terminal polarities many times a second, causing current to change direction with each reversal. AC can create a higher voltage level depending on how you utilize it. This provides advantages for utility companies to transfer electricity over hundreds of miles with little loss by utilizing over a million volts at times, since voltage travels easier than current. Eventually when the power reaches back to your house it is outputted to 100-120VAC, or sometimes 200-240VAC. Because of this, most household appliance are AC, and when you read the specification sheet, you will see the voltage in these ranges.

Now that you know the general differences, it is important to understand the difference of Power in Direct Current (DC) and Alternating Current (AC). Ignoring efficiency loses from either, power should remain relatively constant in both. For example, we can take a 200W TV and look at it in terms of DC (12V) or AC (110V). In terms of direct current the TV would produce 200W/12V = 16.6 Amps. In terms of alternating current the TV would produce 200W/110V = 1.8 Amps. Although the amp and the voltage values differ, the overall power is the same, so the rate of energy consumption, not counting efficiency loses, would be the same.

Power is defined as rate of doing work. It essentially tells you how quickly you can produce energy. Power takes on different forms, but when dealing with electricity or solar, you will define power as a Watt. As stated before, Watts = Volts x Amps. Multiplying the panel’s voltage by amperage will give you a wattage value. This is also true for an appliance. You can also think of power in terms of how much money you make hourly at a job, ie. $8/hour.

Energy is the capacity for doing work. It essentially tells you how much work can be done. Energy can take different forms, but when dealing with electricity or solar, you will define energy as Watt Hours. Watt Hours = Watts x Hours. Multiplying an appliances wattage, by how long it will run for will give you its energy value. Multiplying a panel’s wattage by the peak solar hours will give you its energy value. You can also think of energy in terms your paycheck, if you make $8/hour and work for 5 hours, you have $8 x 5 Hours = $40.

For Solar Panels, the energy produced is dependent on how much sun you get in your location. Sun hours will vary from state to state, but it is important to have an idea of what your states peak solar hours are. For example let’s look at a 100W panel in Texas vs. Nevada. Using Texas’s low value of 4.5 peak hours and Nevada’s low value of 6 peak hours we can calculate the energy or Watt-Hours produce by the panel. For Texas, 100 Watts x 4.5 Hours = 450 Watt Hours. For Nevada, 100 Watts x 6 Hours = 600 Watt Hours. As you can see the state location does have an impact on energy production, in this case by 150 Watt Hours. 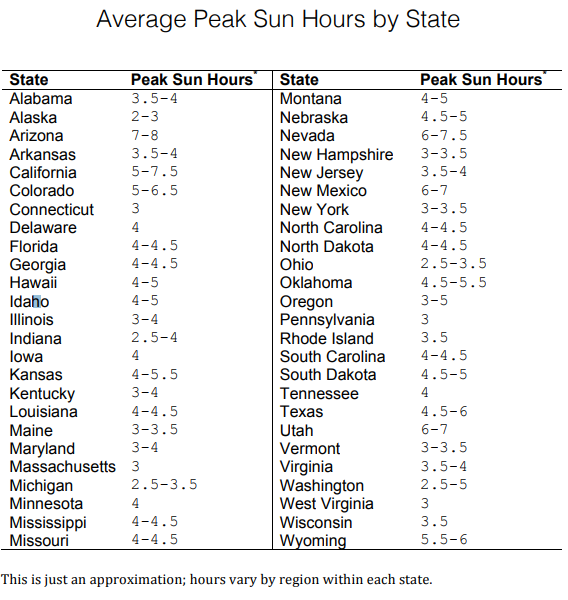 For appliances, the energy produced is dependent on the wattage value of the appliance along with the hours of run time. It is very important that you have the wattage, not just the voltage or amperage as those aren’t complete power values. For appliances, you can take the voltage and multiply it by the amperage. For example, an 8 Amp Fridge at 110V will be 8 Amps x 110 Volts = 880 Watts.

We can also relate energy to our batteries as well. Often times we get told that a customer has a 12V or 6V battery. As from what you saw earlier, this is not a complete form of energy, so just having this information is not enough to determine how much your batteries can store. We need to find the Watt-Hours value. Luckily most batteries are rated in a term called Amp-Hours. Although this has hours in it, it still isn’t energy. To get Watt-Hours we must multiply Amp-Hours by Volts.